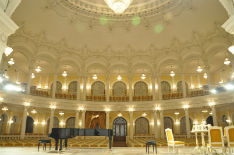 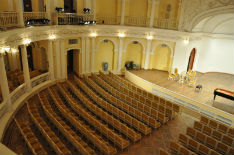 Press on the Forth International Byulbyul Competition of Vocalists

“If we talk about the organizational side of the Competition, considering also the traditional Azerbaijani hospitality, it was up to the mark - a comfortable hotel with the see view was situated in the city center, all participants were provided by the Organizing Committee with accompanists, transportation, and medical care. And there is one important component more: no participation fee is required. The Organizing Committee paid expenses for hotel accommodation of all participants also during the first round, and that is a remarkable difference from many other competitive initiatives...”

“In this competition, laureates are not divided into female and male voices. From my point of view, such a division by gender must be. So it is in many singing competitions. But maybe this is one of the differences of the Byulbyul Competition from others of this kind…”

“This year marks 20 years since XII National Glinka Competition of Vocalists took place in Baku. That time, Irina Arhkipova was Chairman of the jury. Then, she said, she fell in love with this city, and when the Competition was established in 1997, she willingly accepted the proposal to head the new vocal contest in Baku, the capital city of Azerbaijan. Local music fans are proud of the fact that it is in their city of Baku, in the same national Glinka competition of vocalists, opera stars raised such as Olga Borodina and Dmitri Hvorostovsky who are known all over the world today.

Hopefully young talented singers, laureates of the Forth International Byulbyul Competition, will acquire their fame as quickly as their predecessors.”

Press on the Fifth International Byulbyul Competition of Vocalists

“… This year, having invited to Baku art directors and casting directors of leading opera houses all over the world, the Competition revealed a clear desire to integrate into the global context. This raised interest of participants for the contest - that’s the reason of the huge number of applications. Each vocalist beginning a career certainly dreams of performances worldwide. But without knowledge how to approach to Western theaters and without useful contacts it’s difficult to get international engagements. But casting directors do not look just for good voices; they look for particular types and images which would match particular projects and roles. It’s always a very difficult search. In general, the job of a casting director is one of the most responsible, stressful and risky jobs.

It can be compared with profession of a stock trader to a degree of responsibility, search, and unpredictability. That’s also why opera directors from Toulouse, Lyon, Barcelona, Berlin, and New York readily accepted the Organizing Committee’s invitation and came to Baku. As far as they are mainly orientated on the European market of operatic voices, it was a unique opportunity for them to broaden their horizons and searching areas through listening to singers from much farther regions of Central Asia and Transcaucasia. During the contest they had time to supplement their note books with new names; several singers were proposed to sign contracts before the competition ended. In between rounds, additional auditions were organized for those singers who for various reasons did not participate in the contest. To use this chance, more young singers came to Baku from other countries and Russia as well. Summing up, I’d like to say that the Competition has performed its super task in the most brilliant way. Besides of bringing to light the Pleiades of promising young artists, it contributed very effectively to the promotion of best vocal music standards of Azerbaijan. In the second round each participant had to perform a song from the repertoire of Byulbyul…”